Is Salvation About Relationship

In February of 2011 I posted the following to my Facebook Page (notes) and that is where it has quietly stayed pretty much until now. Back then somebody asked a question about the topic in the title and so, you know, it kind of got me going.

I thought of it again this afternoon as we were getting ready for tonight's Live Stream on our YouTube channel, "At Home With Jim & Dee." One of the things we plan to do (Lord willing and the Creek don't rise) is to sing the song(s) we wrote many years ago called "The Noah Suite." These songs appeared on an album called "Agapeland" in 1974/75 and just a small part of the lyrics were eventually quoted in a book called "The God They Never Knew" (The Tragedy of Religion Without Relationship) written by George Otis Jr and released in 1982. So once again - there it was! That topic of actually knowing God & having a relationship with HIm.

"The God They Never Knew" is available on lulu.com and those who offer it do so with permission and at cost. (no profit for them) 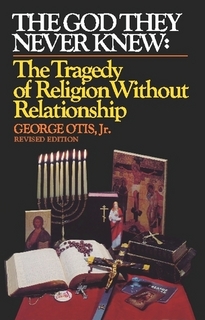 So, I will re-post this entry here as a part of the theme for tonight. :)

Last week I got an email from a friend. He had been communicating with someone and told her that Salvation was about relatioinship (with God). She had a hard time with that wondering how that could be since she had been taught that SALVATION WAS A FREE GIFT. To her, the two didn't seem to mesh. It broke my heart because there are so many like this, who think salvation is something we are handed. So he asked me what I thought...what I might say to this person. After it was done and sent I got to thinking perhaps it was something I ought to share. So here goes...

Is Salvation about relationship? Well, to me it's simple really. Maybe not always easy, but simple nonetheless. The free gift IS the restoration of relationship. Sin has separated us from God relationally. We rebelled. Salvation is God spanning the gulf between us and Himself and bringing us back into relationship with him. It is the forgiveness of our past rebellion based on his willingness and on our humility and desire to cease that rebellion (repentance) made possible through Jesus. It is absolutely free to us in that we cannot do anything to earn what He has made available, but we are also warned to "count the cost" lest we wither and die spiritually (relationally). when trials arise. (Parable of the sower)  So it is a paradox in that, though it is FREE, we must count the cost. That means that we should fully understand that maintaining Our renewed relationship with Him will put us at odds with this world and will not always be easy. It will cost us death to SELF....and...death to self is the hardest death of all. He says we cannot love him and love this worldy system at the same time.

Everyone talks about Grace, but they don't even know what it is. It is not God going easy on us, it is God empowering us as we cry out to him moment by moment - standing with us and giving us what we need to do and become what it necessary. Once again...relationship.   And even if Grace were actually what they say it is, then still, one way or another, He doesn't give it to the proud, the rebellious, the stubborn - but to the humble - the NON rebellious. This "Salvation" is not just salvation from the consequences of sin, but salvation from SIN itself. It is the SIN that is killing us. The death, OUR death, lies in the sin. God's gift is life eternal - eternal relationship and fellowship with the Godhead, and not just in terms of endless time, but infinite love and quality of life.

Jesus said that He had life in himself and that God had granted that he could give that life to whomever he wished. However it is not a gift that comes without Him or is separate from Him. The LIFE is IN him. He cannot give us the LIFE without giving us Himself. He is the vine...we are the branches. To live...there has to be a connection...relationship. A really good book about the subject is "The God They Never Knew"...by George Otis Jr. It is available again through amazon I think. Another is "Life In The Son" by Robert Shank.

"Delight yourself in the Lord and He will give you the desires of your heart." Such a misunderstood scripture, but all it means is this....If you make Him what you want most, then He is happy to oblige and come and abide (dwell....have ongoing relationship) with you. If you WANT him more than anything....He will give you what you want more than anything. Himself. (Relationship) It is free in that we do not have to "work" for it. In fact, works, striving, doing good things to make ourselves "worthy" of his attention...being driven to be "better" or in fact better than others is exactly the WRONG direction....But as with any relationship, what we have with Him has to be based on love and ongoing commitment and trust. It is not performance oriented, but it IS obedience driven. And he says, if you love me you WILL keep my commandments. These commandments...that we love God and each other... are not law based but love based. It has nothing to do with entitlement and everything to do with humility and mercy and selflessness. It is not about actions, but about the heart and motive behind them.

Salvation is not a golden ticket we present at the pearly gates. It is Christ IN us the hope of Glory. Oh, that we should know Him as intimately as a lover, no secrets, no lies, no rebellion, no manipulation, nothing hidden...just love. The Kingdom of Heaven IS loving relationship. The Kingdom of the Evil One IS independence and rebellion, selfish ambition and self interest without considering the needs of God or others..

He woos us, lays His life down for us, forgives us over and over and over and then tells us to let him live in us so that we will be able to go and do the same. If THAT is not about relationship, vertical AND horizontal, then it is nothing at all and we are as lost and adrift as ever we were.

So there you have it. My opinion on Salvation and Relationship and a few other things as well.