Jesus' Cousin - John the Baptist (A Musing for This Morning) 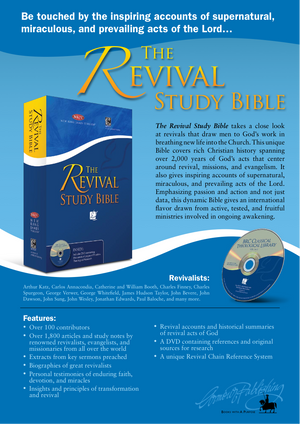 I love reading and studying from my Revival Study Bible. Most of all I love the accounts of people that God used and the moves of God throughout history, but I also love the chain reference materials and the inspiration for thought and further study that they bring. Here's something that got stirred up in my heart today from reading the reference materials for the book of Matthew as I was posting to the Revival Study Bible Facebook Page.

It was about the "Advance Team" ministry of John the Baptist.

Why are there differing types of preaching and ministry? Jesus' style differed from John the Baptist's, but both were Holy Spirit driven, powerful and ordained of God - each serving a specific function in what God was doing and setting up for what He was about to do in the move of God that followed. This little study, from the Revival Study Bible below, explains a little bit about what God wanted to accomplish through the fiery and confrontational ministry of John the Baptist.

We (at least I know I do) tend to think that the preaching style we like best, or the one that moves us most (or perhaps offends our sensibilities least) is the one that is of God. Yet, here we see John who did no miracles and did almost nothing but call people to repent from sin being heralded in scripture as a NECESSARY forerunner to prepare the way for Jesus. We don't have a very detailed account of what that looked like, but we know that John preached against the sin of the Pharisees (as did Jesus) who were outwardly squeaky clean as well as the sins that controlled and destroyed the lives of ordinary people. Remember the Pharisees were harsh and judgemental against outward sin, tried to shame and threaten people into conformity and actually had ways to punish them for repeated infractions. They had a completely rigid and legalistic idea of what serving God meant, which had nothing to do with what went on inside... So - we can only assume that this did NOT represent the kind of attitude or message that John the Baptist came with.

Though his message was "stern" it was certainly infused with the power of the Holy Spirit and the things he preached about were necessary in a culture that really only saw the legalism of the Pharisees or the worldly compromise and duplicity of the Sadducees when looking at the people who were their, then, spiritual and national leaders.

In those days came John the Baptist, preaching in the wilderness of Judea, And saying, Repent, for the kingdom of heaven is at hand! For this is he that was spoken of by the prophet Isaiah saying, "The voice of one crying in the wilderness. Prepare the way of the Lord; Make His paths straight."

Matt 3:3 The Voice of One Crying

A fundamental principle in the management of revival requires the restoration of the paths of the Lord, as well as releasing certain types of revivalists similar to John the Baptist. The cry of this ministry calls people to return to the Lord’s paths and ways.

The type of revivalist mentioned in this passage is John the Baptist, a fiery prophetic preacher, functioning similar to Elijah the prophet. Israel was deeply bound in legalistic, unspiritual, traditional religion. Its leadership was self-righteous and void of spiritual life. Position, power, greed for money, and compromise had replaced the earnest heartfelt seeking of God. The “John the Baptist” type of revivalist prophetically challenged a man-made system and called the people back to seeking God corporately. In seasons where corporate revival is needed, and conditions exist where man has lost the reality of God’s intense existence, only one type of revivalist can usher in the depth of revival needed to confront and change the times. Just as Elijah of old confronted the prophets of Baal and prayed down fire, in a visual demonstration of God’s power to a passive, indifferent people, so the type of revivalist needed to deal with these conditions must minister in a non-traditional, radical, almost nonconformist manner. The Spirit of God functions through this type of revivalist in dynamic, deeply convicting preaching, seasoned with spiritual fire. This type of revivalist does not frequently emerge on the spiritual scene, and only does so when the conditions are such that no other type of ministry can bring the desired results. Revivalists like these are often born out of years of isolation, prayer, and intense personal commitment to see conditions change. They are a rare breed. John the Baptist’s responsibility as a prophet (Matt 21:26; Mark 11:32; Luke 7:28, 20:6) in ministering revival was to confront the religious standards that hindered intimacy with God, and to open up the way for Jesus to come. His prophetic ministry agitated the self-righteous Pharisees and Sadducees by calling them to repentance and fruits characteristic of a changed life.