Funny. I can’t dredge up any one specific memory about writing “Mrs McSheep.” I know we did write it, but I can’t remember exactly where we were or what specifically inspired us to, except that we were new parents around that time and we were very “into” fairy tales and children’s stories. Of course, we were “into” children’s stuff WAY before we became parents, but I digress.

It (the song) was probably written before our first daughter, Fawn Lorien, was born; during a time when I was threatening to miscarry and bedridden because of it. We wrote a lot of songs during that couple of months. Songs like “The Noah Suite” “Starlight Starbright” “Thanksgiving” and a handful of others that we still sing today.

But “Mrs McSheep” was a little different. It was the re-telling, in song, of a fairly well-known fairy tale. An exercise, if you will, in turning prose to verse, getting more story into less words and hopefully, coming up with something that succeeded in “evoking” something. Like many other standard fairy tales there are several versions of this one. Sometimes it’s goats instead of sheep, the number of sheep might vary and the ending might differ from one version to the next. In essence, however, the story is about a mother sheep that goes to market and has to leave her “lambs” at home. She warns them not to open the door to anyone but her and then sets out on her way, not knowing that a wolf has seen her leave. The wolf comes to the door, pretends to be the Mother Sheep and eventually deceives the lambs (or one of them at least) into opening the door to him.

Like most fairy tales the story works on several levels; as a simple tale for children who rarely see a truth behind the story, or on a deeper plane, addressing real issues about good and evil, deception and the immature or naive being duped and then having to be rescued.

We thought the story worked well as a parable. The devil, played by the wolf, waiting for an opportunity to deceive and destroy. It is a story as old and tragic as the “garden” when you replace the little lambs in this fairy story with our own little lambs in real life. Those of us who remember safer times in our own childhood will have to admit that this kind of evil is as old as the world itself, even if the level of the threat may ebb in a generation, perhaps because of a revival in history or a culture still somehow based on Godly principles. If you do feel the change, the increase in fear from one generation to the next, the sense of increasing danger and threat to our children, you're not alone. I feel it too. Big time. Yet, obviously, this kind of threat and fear has been around a long time if it birthed at least one and maybe more of our more famous fairy tales.

My first memory of performing “Mrs McSheep” in front of an audience is from August of 1976. The outreach was called “Three Weeks In August.” It was sweltering and miserable outside. I remember that much. The city was Houston Texas. A little later we remembered that time by asking “You know where liars go?” and the answer was always “Houston.”

Some time during that three week outreach, much of which has become a sweaty blur in the back of my mind, we performed “Mrs McSheep” to a gathering of some type. Two things about that evening were memorable. ONE, I think I was a little anxious about the kind of reception the song might receive, especially from leadership. It wasn’t very “overt” in its message and I didn’t know if people would “get it.”  TWO, our friend and fellow missionary, Georgian Banov, (who had escaped to the US from Communist Bulgaria in the early 70’s and had since become a follower of Jesus) played with us that day. He played his flute and, in my opinion, it added a haunting, old world, quality to the song that will forever linger in my mind. The flute has given way to a harmonica and I like that too - since neither Jim nor I play the flute I guess it will have to do. No. Really. I like it this way. :)

For us, the song is about Spiritual Warfare. It’s about deception and about the possible fatal consequences of being careless with instructions given to us for the safety of our body and soul. If I had written the same song later in life, I might have tried to include the standard fairy tale rescue scene which often includes a woodsman, an ax and a seriously dead wolf, but even as is the song is almost 4 minutes long. That's REALLY long for a Jim & Dee song.

But back then it was more about the warning anyway, about the warfare and about the evil intentions of the enemy of our souls. Sometimes now, when a child hears us play “Mrs McSheep” for the first time and his eyes get as big as saucers or she shrinks into her chair just a bit, we might ask one of the other kids to finish the story. But sadly, the truth is that Mrs McSheep doesn’t always conquer the wolf in time and as the warfare over souls escalates, deception of all kinds is increasing as well.

There is actually a rescuer, who laid a trap for the wolf long ago, but he isn’t a Woodsman and he didn’t just happen to be in the neighborhood. He’s a Shepherd. THE Shepherd. He and the wolf have long history but the Shepherd has a Helper uniquely qualified to assist in the rescue and ongoing education and protection of His sheep.

If you are still alive there in the belly of the wolf, take heart and read this.

But when He, the Spirit of Truth comes, He will guide you into all the Truth; for He will not speak of His own initiative, but whatever He hears He will speak; and He will disclose to you what is to come. John 16:13

Now that’s a Shepherd and His “sheepdog” I’m happy to have around. Baaaa.

Check out the song "Mrs McSheep" right here at the end of this blog post OR as parat of the podcast it was part of HERE or HERE. 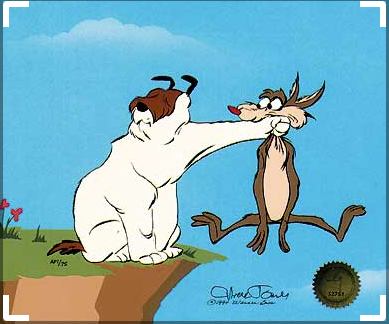