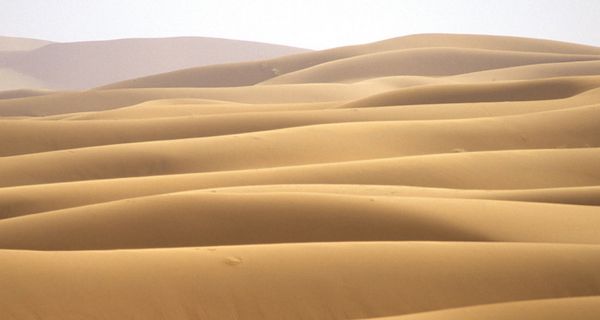 I have always referred to this dream as:

With whom: Serving with an evangelistic team as a part of the Agape Force during a week of intense ministry to young people at the camp.

In my dream I became aware that I was standing behind a low wall made of stone. It was something like the walls along the beaches of Southern California that divide the beach from the walkways, shops and housing on the inside of the wall. The wall was somewhere between thigh and hip high and I stood close enough to reach out and put my hand atop it. I was standing as if "at ease" looking out over that low wall. Before me, on the other side of the wall, there was an ocean consisting of sand that stretched out as far as the eye could see. No life of any kind broke the monotony of that sand sea and somehow I knew that this was exactly the right word for it. It was a sea of quicksand. One could not go over the wall and live.

There were no right angles in the wall as I scanned its length to the right and left. It curved slowly away behind me on either side. Directly in back of me and filling the space inside the circle of the wall, there were low buildings and huts made of rammed earth which was mostly sand. The area teemed with life. Things were green and lush everywhere, an oasis in a vast desert wasteland, watered by a single fountain that geysered upward and stood in the very center equidistant from every point on the wall.

Although the place was alive with activity, I was there in what I knew was my usual place alone. I looked about but my eyes returned every few seconds to the horizon. From the wall to that horizon there was still nothing. That felt wonderful to me. Just endless sand. I knew somehow that watching that horizon was the thing I was supposed to do even if I wasn’t sure why.

To both my left and right, just where the wall began to curve away from my sight another  person stood. Another like me. Each wore the same kind of clothing as the other. A uniform perhaps? Looking down I saw I was wearing the same kind of garb. Loose fitting and Bedouin like. I began to realize that this was a walled city and that I was a warrior of some kind, but it didn't make a lot of sense.  I had no weapon and the wall was very low, unlike a castle wall or any normal kind of fortress.

My job, I realized then, as if remembering something known for many years, was just to be there in my place, close to that wall. To be there standing and watching.

As I looked again toward the horizon over the sea of sand something large and ugly broke the surface and flew, as if to glide over the wall and into the city. My pulse quickened. Adrenaline spiked, but I stood watching. Unmoving. I didn't yell or sound an alarm of any kind. I just fixed my eyes on it and stood there. I knew in that moment that this was my post and my job was to stand unflinching.

As I stood, the monstrous winged thing flew ever closer, but just as it was close enough to see its twisted features and hear the beat of its wings the wall shot up of its own accord. A rushing upward. As it did I saw the creature try to gain height too late and a loud thud sounded with a cry of pain and fury from the beast.  Yet the impact did not create even the slightest tremble in the wall; That low wall which by now I could not even see the top of.

As that attack passed into the past and the wall returned to its' normal height I remembered more. These attacks came often. Hardly a day without them. Things both real and unreal. I came, along with others like me, day after day and night after night in shifts to stand close, very close to this wall of living stone. I marveled at it. In the dream several more attacks of various kinds occurred while I stood and watched the wall in action.

Some attackers tried to fly or climb over that wall. Others to dig under it. But whatever came the wall would grow as high or dive as deep as was needed to keep each vile thing out that was trying to get in. I knew it had been this way for generations in this city. Standing close to the wall. Looking outward. Standing firm but at ease. Trusting. Staying close enough to the wall to touch it. Giving my life energy and attention to it and it to me.

But there was one last horrifying scene in my dream.

A dragon like creature, many times larger than any we had ever seen, assailed the wall in what had to be the worst attack in all the years of the wall and our city.

And we failed. Was it me or someone near me on the wall? I couldn't tell. It felt like it was me, but I couldn't remember flinching. Nevertheless it was the most horror I had ever experienced. Someone shrank back. Was it me? Someone turned as if to run.

When that happened connection with the living stone that formed the wall was broken and it exploded in that spot. The dragon flew right into the breach and began a horrible destruction. Then as if they had been waiting, other things began to enter there as well. Alarms sounded and warriors with weapons poured like ants out of the huts and buildings to meet the things coming through, but the devastation was horrific.

I was pushed aside and out of the way still weaponless, and in just that short time everything changed. Now I knew shame and I knew I could no longer stand the wall.

I somehow knew that I had a new job. A new assignment. No memories existed for this new assignment. The thing that must be done now; and this was all I knew, was that I had to seek something that was needed while shunned and shamed and shunted to the side as fires burned and battles raged within the city.

The entire wall had not yet broken so the city fought to protect that spot where the enemy had entered and hunt down the evil that had come in to destroy and infest. I found only one who would help me and that one came alongside. My job, our job was to find out where to look and to learn what must be done to repair the breach and then to do it. At any cost.

Then I woke up.